Sweet (Stabilized) Stiff Whipped Cream: the perfect topping for cakes, pies, parfaits and summer desserts! It is delicious and holds its shape, even in the heat. I’ve been asked more than a few times how my whipped cream stays so pretty and holds its shape. Even in the heat. Like on this Blueberry Pound Cake. So I thought now might be a good time with summer here to come clean with my secret. And here it is, drumroll please: beat unflavored gelatin, dissolved in water into the whipped cream during the last stages of beating.

While I often make regular homemade whipped cream, it doesn’t hold up well in a desserts like a parfait or even between cake layers. It can get watery and lose its pretty shape quickly, especially in the heat.

Last month one of my kids requested a brownie parfait instead of a traditional birthday cake. I made the parfait early in the day with homemade brownies, whipped cream, pudding and toffee bits.

But when I went to get the parfait out of the refrigerator, the whole dessert had sunk a few inches. I’d forgotten to stabilize the whipped cream. It slid down the sides of the trifle bowl and wasn’t nearly as pretty as when I’d made it that morning.

So here are some quick tips on making perfect Sweet (Stabilized) Stiff Whipped Cream every time: Slowly add dissolved gelatin in a steady stream while continuing to beat with electric mixer until stiff. Do not add any hard bits of gelatin that may have stuck to the sides and hardened. Add only liquid gelatin. This Sweet Stabilized Stiff Whipped Cream is the perfect creamy topping for all your summer desserts: cakes, pies and parfaits! 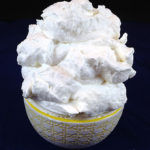