So I made this amazing New England Bacon Corn Chowder for the first time this week. It got two thumbs up and rave reviews from all the Taylor boys. Also the lone Taylor girl. (That would be me.)

There’s something magical about coming in from the cold on a blustery, wintry day to a steaming bowl of creamy corn chowder. Corn chowder with bacon, mind you.

This New England Bacon Corn Chowder is one of the easiest and most flavorful chowder recipes I’ve made. The thick, creamy texture comes from creamed corn, milk and cream. Onion salt and celery salt give great flavor. It tastes even better on the second day. “Established in 1975, Peter Christian’s has been serving home made victuals & strong waters to thousands of satisfied customers for over three decades. Nestled in the heart of New London, New Hampshire, the tavern exudes the comfort, antiquity and charm that warms the heart of New Englanders, on even the coldest of days.

Offering guests some of the tastiest morsels around in a relaxed and friendly atmosphere provides not only nourishment for the body, but respite for the soul. With signature sandwiches and recipes that have served up for over 35 years, a single trip to the tavern invokes nostalgia, and the return trips are like a welcoming home. Peter Christian’s is a local favorite because of of its’ unmistakable old New England charm.” This New England Bacon Corn Chowder recipe is a real treasure and I hope you’ll give it a whirl. Saute the onions, celery and potatoes for just a few minutes. Simmer with water for just a few minutes more. Stir in the creamed corn, spices, milk, cream and bacon. Simmer for twenty minutes.

You’re in for a real treat. I doubled this recipe and so glad I did. We’re enjoying soup and sandwiches for lunch this week. The flavors of this soup meld and taste even better the second day. 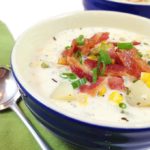 You may also like: Simon Pearce Vermont Cheddar Soup