I was chatting on the phone with a friend recently. She told me she was busy in the kitchen. Busy doing WHAT? (Nosy me.) Making peach jam, jalapeño pepper jelly and Jim Beam Toasted Pecan Ice Cream. (What a slacker. ) And whoaaa. Come again? I’d never heard of that flavor of ice cream deliciousness before. So she told me how easy it was to make. And I tried it today. And she spoke truth. It took about ten minutes to make and then I let it harden in the freezer for about six hours. Not to mention it tastes absolutely divine. This is one of the easiest, most sophisticated ice cream flavors you’ll ever make. It’s rich and has just enough bourbon to give a little kick, but still freezes hard enough for scooping. Just three ingredients for this quick ice cream and you’ll be smiling too: store bought vanilla bean ice cream, pecans, Jim Beam bourbon. Toast the pecans on the stovetop, then cool.  Soften the ice cream just enough to stir in the bourbon and pecans. Freeze for 6 hours or until hard enough to scoop. This ice cream is perfect packed in a waffle cone and heavenly with Fresh Peach Pound Cake. (Just sayin’.) Hope you love this delicious ice cream! 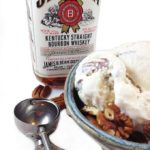